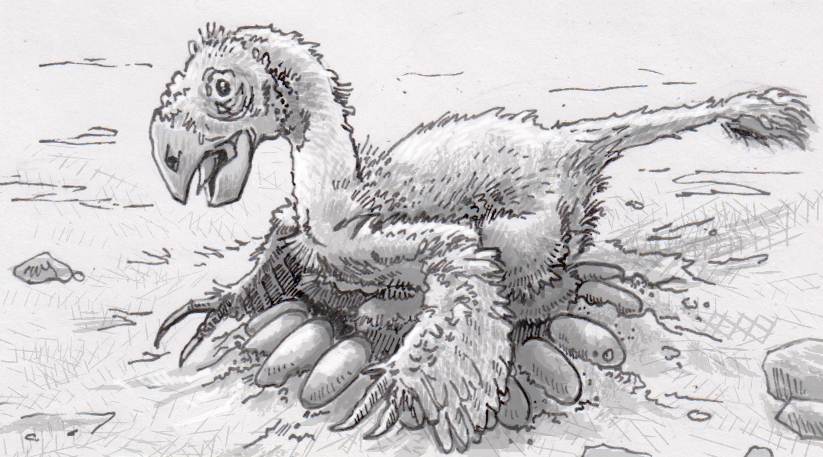 Out of all the challenges a parent faces, at least we don’t have to worry about how to properly sit on our children. As mammals that gestate our young inside their mother’s endothermic bodies, humans can be pretty sure that there’s no upside to perching atop our offspring. It sounds a bit ridiculous, but even warm-blooded birds and dinosaurs had to likely grapple with how to best incubate their eggs at some point in their evolutionary history. In fact, multiple studies have been trying to figure out how and when these occasionally gigantic animals ever managed to incubate their eggs without smushing them in the process.

A modern bird’s pelvis is flexible enough to allow the passage of a relatively large egg. This larger egg allows for incubating babies to be as large and robust as possible when the egg is first laid, giving them a bit of a head-start on their development. It also allows for a larger, stronger egg, which raises questions about avian dinosaurs long ago.

A study of various species’ fossils found that ancient pelvis bones were fused together more tightly than their younger counterparts. This would limit the size of an egg that could be laid, forcing creatures like Archaeopteryx to have a much daintier clutch of eggs than more modern birds of the same size. These eggs would likely be more fragile as well, possibly to the point where the relative bulk of their mother would be dangerous. If true, this suggests that birds couldn’t really sit and warm their nests before birds’ pelvises evolved to allow for relatively larger eggs, around 100 million years ago.

A second study looked at maternal bulk from a different angle, starting with the clutches of eggs themselves, rather than mothers’ pelvises. There’s some evidence that oviraptor dinosaurs would sit on their nests for warm or at least some kind of protection, so researchers started comparing nests to see how these creatures managed their eggs. While modern bird eggs are reliably strong enough to handle their mother’s weight, some species of oviraptor grew to be at least 3,300 pounds, heavier than any egg could be expected to handle.

Looking across eggs from multiple species of oviraptor, a general strategy started to become apparent. The ostrich-like dinosaurs arranged their eggs in a circle, with each oblong-egg arranged to “point” outwards from a central point. The eggs were fairly precisely arranged, always leaving an empty space in the center of their circle. The size of that empty space was found to be disproportionately larger in larger species of oviraptor, which researchers believe was intentional. It would have allowed a heavier mother to sit and place the bulk of her weight on the ground in the middle of her eggs, allowing the perimeter of her feathered body and arms to actually cover the eggs. Smaller species could apparently rest more directly on their clutch, as the empty space in the nest was significantly smaller, even for a smaller mother.

Bury the eggs if you’re too big

So if a larger oviraptor likely left room for her body between her eggs, how did multi-ton behemoths like Argentinosaurus deal with its eggs? There’s evidence that they employed a less attentive approach to nesting, which meant digging holes with their back legs, then burying eggs in those holes. Clutches of sauropod eggs have even been found in extended lines, meaning each egg was left to its own devices (and a bit of insulating dirt.) This may sound neglectful when compared to the efforts most modern birds put into parenting, but there are some modern birds like the malleefowl that rely on elaborate mounds of dirt to incubate eggs while the parents leave the nest behind. In those cases, it’s not even that the parent bird is too heavy to incubate a clutch of eggs. The advantage is that a parent is then left to move on and find food and more mates for the future, leaving their offspring to figure out their temperature and nutritional needs for themselves.

Source: How 3,000-Pound Dinosaurs Sat on Eggs But Didn't Crush Them by Laura Geggel, Live Science