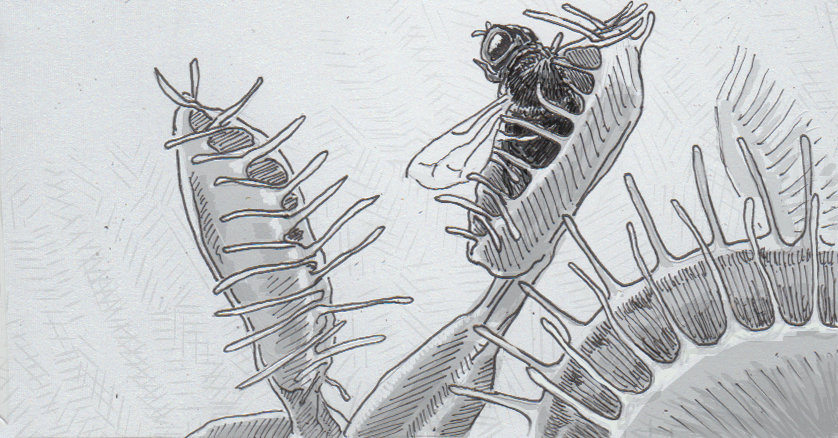 The best way for a bug to survive an encounter with a Venus flytrap is to hold… very… still. The carnivorous plants have evolved leaves that can go from being bait, to mouth, to stomach once it’s triggered, like a sort of botanic booby trap. Along the interior surface of the leaf are a series of mechanically sensitive, whisker-like structures that initiate and scale up the plant’s feeding process in a system designed around the wiggling, panicking movements of the captured insect.

When an ant or fly first touches one of the sensitive hairs, the plant appears to ignore it, although internally an electrical signal, called an action potential, kicks off the first of the hormones needed in case food is to be captured. Once a second hair is touched, the flytrap snaps shut, trapping the insect inside between the folds of the leave and the cilia along the outer rim. Once the leaf has folded shut, it can transform itself into more of an external stomach. The third touched hair triggers the production of digestive enzymes to break down and ingest nutrients from the captured bug. While bugs generally panic, squirming and kicking repeatedly, the plant waits until at least five touches have been made to its sensitive hairs before truly starting to digest its meal.

Staying efficient with your enzymes

The sequence of events likely evolved as a matter of efficiency. Venus flytraps need to eat meat to cope with the poor soil conditions in their native habitats, and so they’re quite sensitive to conserving their resources. False positives, like a raindrop hitting one of the sensory hairs, would be wasteful to try to capture. To this end, the flytraps only close their traps after that second touch. They can also be conservative with how much energy goes into producing digestive enzymes by waiting for further triggers. The subsequent movement of the captured insects actually help the plant scale it’s enzyme production, with more triggers leading to more digestion. A livier, larger bug is more likely to hit the internal hairs more frequently when it’s trapped, and may also need more digestive juices to marinate in.

Most meals are wrapped up in about 12 days. Surprisingly, in addition to the carbon, nitrogen, phosphate and sulfur the plants collect from their prey, they also seem to ingest salt. It’s thought that the salt may help in balancing their water content, or may be part of the hormone cycle that helps the plants snap shut when it’s time to do so.

My first grader asked: Do the flytraps sense if its sunny outside? Maybe that way they can tell if its raining or not.

While many plants are obviously photosensitive, the flytraps need to avoid closing over wider range of false-positives than just bad weather. Any kind of debris that touches the internal hairs triggers the electrical action potential that starts the digestive process, and researchers were able to “trick” plants just by poking the hairs repeatedly with a stylus. The fact that this was done indoors under a fluorescent “sun” didn’t seem to be a factor.

Source: To catch a meal, a Venus flytrap counts to five by Sarah Zielinski, Wild Things