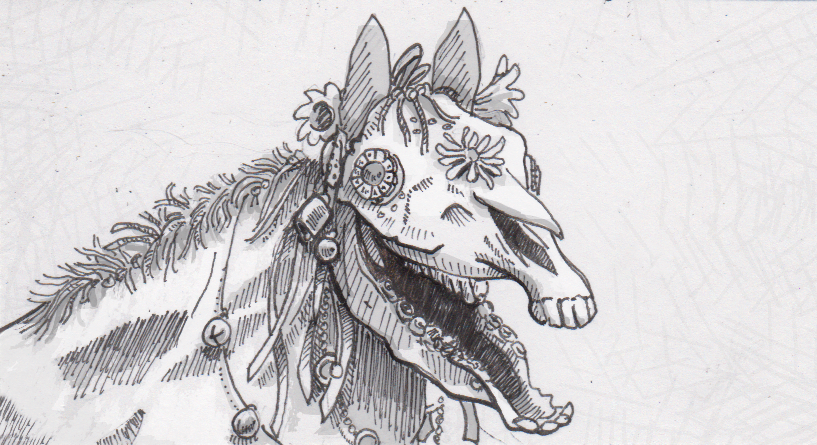 While climate control and electric lighting can now make the winter solstice a footnote in our seasonal plans, it’s fair to say that getting through the longest nights of the year were hard on ancient peoples. Dark, cold nights and fewer options for food seemed to really take their toll on early Europeans, who coped by focusing on the eventual promise of the next spring. Attitudes ranged from merry to macabre, with the particular tradition of Mari Lwyd in Wales encompassing a little bit of everything, right down to horse-skull puppets trying to invite themselves to a party.

From pagans to Punch and Judy

Mari Lwyd’s earliest origins aren’t explicitly recorded, but the symbolism involved suggests that it predates the early influence of the Christian church in the fourth or fifth century. The central figure of Mari Lwyd is depicted as a horse skull on a long pole, with its puppeteer covered in a white shroud like a ghostly steed. The name can be interpreted as “Gray Mare,” probably referencing the horse goddess Rhiannon, who was Queen of the Underworld in ancient pagan traditions. The long nights found between the solstice and New Years Eve were thought to be especially accommodating to spirits and ghosts, including the titular skull-faced apparition.

Documented accounts of Mari Lwyd celebrations show how the tradition changed over the centuries. Pictures from the 1900s include the horse-skull puppet being accompanied by a crew of well-dressed revelers, including people intended to be the 18th century characters Punch and Judy. Aside from the formal attire, the only hints at other holiday activity is the ribbons, ornaments and baubles draped off of the Mari Lwyd puppet, although the overall tone still seems to be tied to Halloween more than Christmas or New Years Eve.

Song of the horse spirit

If all this weren’t confusing enough, consider that the actual activity surrounding this motley crew of revelers is sort of like Latin America’s Las Posadas, except as a rap battle in Welsh. Typically, the Mari Lwyd puppet would be taken to people’s doors, but rather than reenact the Biblical story of Mary and Joseph looking for an inn in Bethlehem, the horse spirit requests entry into people’s homes via a song called pwnco so that it can have fun and banish bad luck. The occupants of the home respond with snappy rhymes of their own, either to outwit or insult the revelers outside, until finally relenting and allowing them entry. Everyone shares some food and drink, until Mari Lwyd and her entourage move to the next home. While this is often tied to New Years Eve, Mari Lwyd will sometimes the rounds closer to Christmas, in which case Christmas carols may be mixed into the pwnco repertoire.

As with many mid-winter festivities with pagan origins, the Christian church has had a hard time dealing with Mari Lwyd celebrations. In an attempt to assimilate the tradition, it has been suggested that the name be translated as “Holy Mary” instead of “Gray Mare.” Other members of the church, such as Babtist minister William Roberts, have been more confrontational. While the tradition was already in decline in the 19th century, the reverend Roberts actively campaigned against the “folly” of Mari Lwyd. However, by publishing 20 verses of the pwnco, Roberts inadvertently provided the most complete record of the celebration to future generations. You can still find people marching the streets of Welsh towns for New Years as a way to preserve their cultural heritage, even if they need to build their own horse skulls out of cardboard to do so.

Source: The Magic Of The Mari..., Folk Wales.org