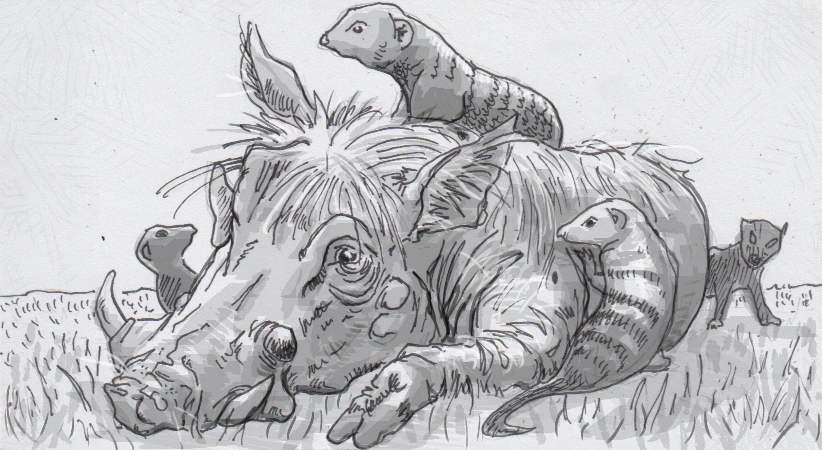 Ticks suck. They bite a hole in your skin, then suck blood out with a harpoon-like structure called a hypostome, which makes getting them off you a more delicate procedure than swatting a fly or mosquito. It’s recommended to remove a tick from your skin with tweezers, grabbing it by the head with enough care to avoid crushing it if possible. You then need to check the wound for broken bits of the tick’s mouth, clean it with soap, and dispose of the tick without mashing it up. If this procedure isn’t feasible, your next best option may be to call in some hungry mongooses.

If you’re a warthog (Phacochoerus africanus) living in sub-Saharan Africa, odds are you can’t follow the clinical guidelines to get rid of ticks, and thus need to rely on some more creative ways to cope with these persistent parasites. Some warthogs seem to have found that the local mongoose population is more than happy to help remove and eat the insects, and have been observed acting to facilitate such transactions. The warthogs were seen lying down, moving their legs out of the way, and holding still while a group banded mongooses (Mungos mungo) crawled all over their bodies, scouring them for possible bugs to snack on. The motivations of each party may seem obvious, but the behavior points to a semi-sophisticated, mutualistic routine for both the warthogs and mongooses that has likely been ongoing for some time.

This isn’t the first time another species has been seen cleaning bugs off of African warthogs, but it’s significant for how well established the procedure seemed to be. Another recent inter-species cleaning involved a turtle eating bugs off of a warthog standing in a small watering hole, but it was unclear if that was repeated, prescribed behavior, or just a lucky opportunity for both animals. The mongooseses, in contrast, were picking ticks off more than one warthog, and the warthogs were clearly seen trying to accommodate their small grooms with the project. It suggests that this is a developed relationship, mutually benefiting everyone but the ticks.

My three-year-old said: I had a tick, and birds came and ate it off me!

While he did actually have tick on his arm recently, he apparently missed that we were talking about mongooses, not geese. And that his tick was removed with tweezers, not hungry animals.