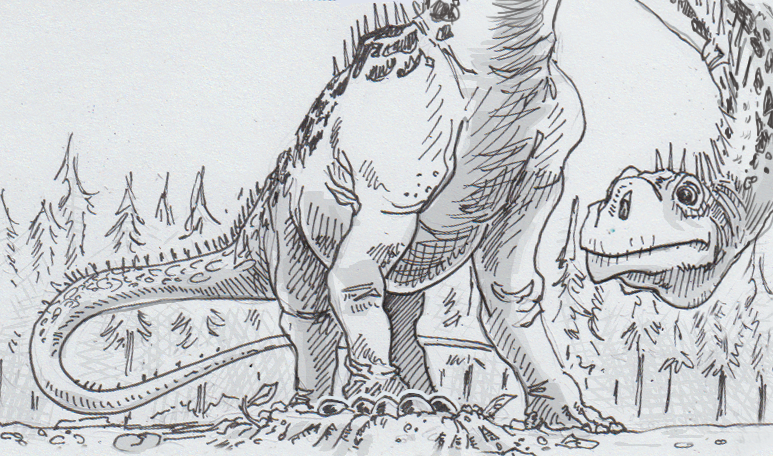 What a titanosaur needs in a nest

Nesting, whether you’re a hummingbird or a Tyrannosaurus, is about keeping one’s eggs safe and healthy. Depending on what niche an animal fills in its local environment, a nest might be designed to keep eggs warm, intact or maybe just hidden so nobody comes to snack on them. So an oviraptor nest might be designed to hide in tall grass. Hadrosaur nests were often clustered together for some help from the herd. Growing evidence suggests that, despite such striking bodies, titanosaurs had some similar parenting concerns as their neighbors in the Cretaceous, as well as some birds alive today.

The aptly named titanosaurs were some of the largest animals to ever walk on land. Animals like Argentinosaurus are estimated to have grown up to 110 tons, stretching 130 feet long. This impressive size may have helped to scare off predators and find food, but it likely made laying eggs a slightly awkward process. While titanosaurs and other sauropods were huge, their eggs weren’t scaled proportionally to the adults. By the time they hatched, the babies were a mere 11 pounds, no where near the heft of their parents. This meant that sitting on a clutch of eggs probably wasn’t an option, but that doesn’t mean the eggs weren’t well attended.

Since parental body-warmth wasn’t really an option for eggs’ incubation, one of the primary duties of titanosaur nests was to maintain the eggs’ temperature. In Sanagasta, Argentina, this seems to have been accomplished with the help of underground heating. Eggs were laid in shallow, dirt bowls, likely dug with the adults’ feet near geothermal features in the area. The heat from underground would then warm the eggs, saving the parents a lot of trouble.

Nesting colonies found in Spain show the titanosaurs employing a slightly more proactive method of temperature control. With no geothermal activity to rely on, the nests appear to have been covered with rotting plants. As the plants decay, they generate warmth, as well as provide an insulating layer for the eggs. This technique is still used today by some birds, such as the malleefowl in Australia.

Assuming the malleefowl model caries beyond the nest, these hulking parents probably didn’t attend too closely to their young after they hatched. The hatchlings likely needed to quickly assimilate to the larger herd, without the doting care we expect of some other species.