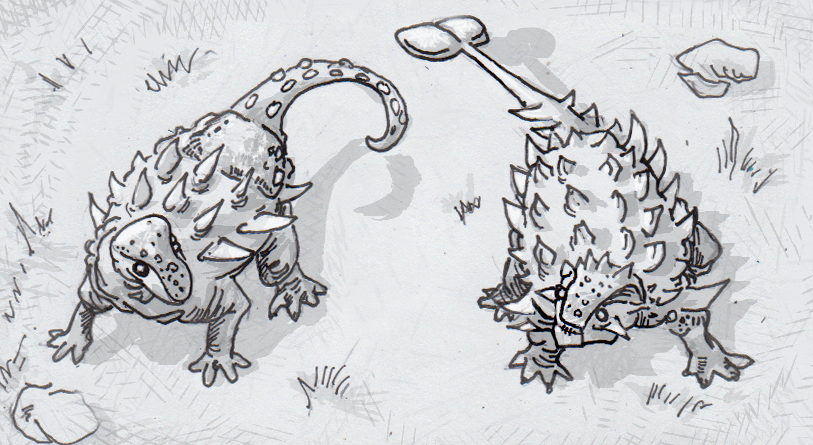 What it takes to weaponize an ankylosaur tail

Ankylosaurs are often described as “walking tanks,” thanks to their armored backs, heads and even eyelids. Plus, many were armed with a long piece of weaponry with their bone-breaking tail clubs. A club is often thought of as a crude weapon, but the anatomical specializations needed to wield a successful weapon off one’s butt are nothing to sneeze at. There are two main components to consider— the stiffened tail and the weighty cudgel at the end, and knowing how those developed may inform us about exactly what these dinosaurs were doing with them.

What makes for such taut tails?

Ankylosaur tails were strong and stiff thanks to tightly fitted vertebrae. The bones in these herbivores’ tails interlocked, forming a structure as rigid as a bat. This structure likely helped the dinosaur get more leverage when it wanted to swing its tail as a weapon, but the paleontological record suggests the tail stiffened before there were any heavy knobs to swing. Early ankylosaurs from the late Jurassic period, like Mymoorapelta, had flexible tails. Later species, like Gobisaurus domoculus, have been found with stiff tails lacking any kind of cudgel. In fact, the trademark clubbed-tips don’t really show up on tails until the late Cretaceous, indicating that they evolved after the tails locked up.

The clubs themselves are more or less overgrown osteoderms. Osteoderms are the armored nodes that cover the tops of ankylosaurs, and in the club it appears that two such nodes grew larger and larger over time, fusing into a formidable weapon. While the physics involved show that the dinosaurs’ locked-vertibrae were strong enough to support such large clubs, fossilized specimens don’t always hold up so well. A key part of the analysis in this research has been to confirm that clubless tails grew that way, as opposed to having lost the club portion of the tail some time in the last 66 million years.

This timeline helps establish what happened in ankylosaur tail evolution, and it begs for some ideas about why things evolved in that order. Intuitively, it seems like a club on stiff tail would be easier to maneuver than one on a flexible tail. While a flexible tail may be able to strike with impressive force when whipped around, the weight of the cudgel seems harder to manage in that scenario. A stiff tail would possibly help carry the weigh of the club better, especially when sparing with a threat. Assuming these guesses are anywhere close to the truth, figuring out the eventual enhancements on a weaponized tail might not be the critical question. If the osteoderms made the tail a club, what pushed ankylosaur tails to become handles in the first place?

Source: How the ankylosaur got its tail club by Victoria Arbour, Pseudoplocephalus