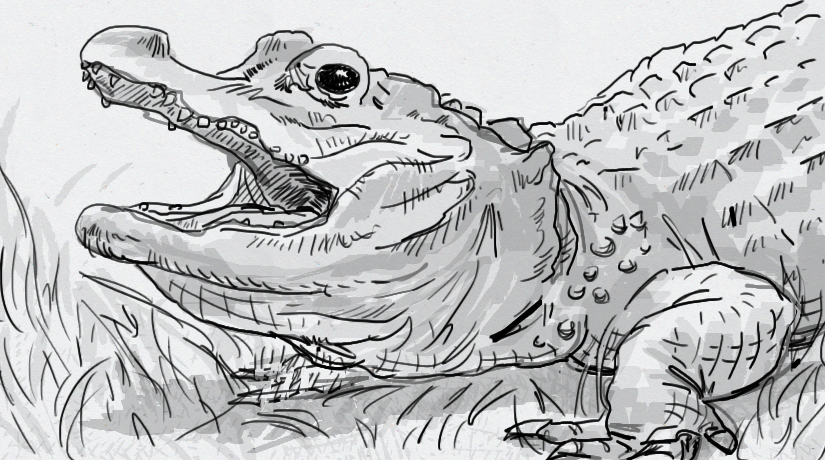 What you can learn from a squeaky alligator

Your voice is the product of a complex physics recipe. Your lungs, vocal chords, tongue and lips all contribute to shaping the sound waves that come of of your mouth and allow you to communicate with the world around you. Despite the number of moving parts, this kind of resonance-based vocalizations are found in other animals as well, most obviously in birds who can use it in song. Resonance vocalizations may actually be quite ancient, as it has recently been found in alligators as well.

While we can obviously just listen to alligators making noise, our ears can’t discern exactly how they’re producing each sound. Frogs and toads can make a variety of sounds without resonance, and so researchers needed to find a way to isolate this kind of activity. The answer was to introduce heliox, a mixture of helium and oxygen that would be safe for the test subject to inhale (thanks to the oxygen) while still altering the properties of possible resonance activity (thanks to the helium.) Helium is lighter than the air animals’ voices are normally tuned to, and thus the movement from an animal’s voice box will cause the helium to vibrate much more quickly than usual. Faster vibrations mean the resulting sound will have a higher frequency, leading to a squeaky voice.

A perfect test subject was located in Florida. A talkative Chinese alligator was found already living in an isolated enclosure, making it easier to introduce the heliox. Researchers played recordings of the gabby alligator to get her talking, and then recorded and analyzed the new, helium-based sounds. Interestingly, the alligator’s “bellows” sounded deeper, dropping in frequency, but other portions of the reptile’s “speech” did get squeakier. This meant that alligators do at least partially depend on resonance to produce sound.

Resonance as old as reptiles

While it’s great to know that alligators have this fun party trick up their sleeves, there’s more to this than funnier-sounding reptiles. This study shows that alligators are among the animals that can use resonance to communicate things like their size to their peers, since the volume of their body plays a role in setting the pitch of their voice. It also shows that between birds and crocodylomorphs, this ability was likely present in most extinct dinosaurs. It will be interesting to see if even more primitive creatures can ever be determined to carry these traits, but getting fossils to inhale helium may be a bit of a barrier in figuring that out.

Source: Alligators use resonance for communication by Kathryn Knight, Journal of Experimental Biology