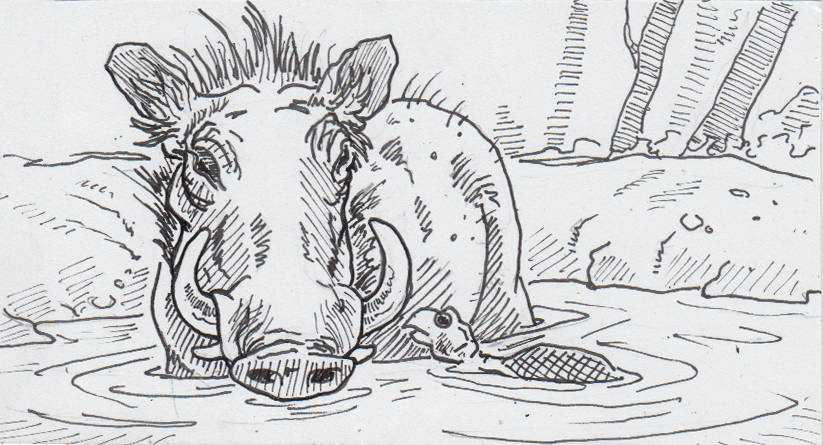 When benefits between animals are mutual but not mutualistic

African warthogs (Phacochoerus africanus) are omnivorous members of the pig family bearing a striking set of double tusks that can be used for defense, sparring and digging. They grow up to 165 pounds, and live in a range stretching from equatorial to southern Africa. They’re also, in a pinch, a handy buffet cart for South African helmeted turtles. (Pelomedusa galeata). At least on certain occasions.

Two turtles were recently documented eating parasites off of a warthog that had submerged itself in the turtles’ watering hole. As the warthog waded in, the turtles swam right over like a couple of perky gas station attendants to clean off all the insects the warthog was carrying. Over the course of 10 minutes, the warthog calmly allowed the turtles to clean its sides and even face, finally lowering itself deeper in the water so the turtles could access that one, last, bloodsucking fly. This wasn’t the only time turtles have been observed eating bugs off of larger animals, but it’s a very unusual scenario. It may also be thanks to the warthog more than the turtles.

Many species in the world have developed mutually beneficial relationships critical to their lifestyles. This phenomenon, called mutualism, can be seen in many places, such as honeybees that gain nectar from flowers, while at the same time spreading pollen for the flowers’ benefit. More similarly to the warthog and turtle, oxpeckers sit on various species of large mammals on the savanna, eating parasites from a safe location while obviously assisting their host by removing said parasites. (Update: well, maybe oxpeckers aren’t so helpful after all…)

So why would the turtles not be a mutualistic relationship? Unless a lot more sightings can confirm that this is a reoccurring event, and that it’s important to the lives of both the warthog and the turtles, it’s likely to just be a clever warthog and some hungry turtles taking advantage of the opportunity. While this feeding was obviously great for everyone but the bugs, the turtles don’t seem to have any dependency on it, and in the rainy season might not bother to find a bathing warthog when food is more readily available elsewhere. It’s convenient and beneficial, but it’s not something either the warthog or the turtle are really relying on (as far as we’ve seen so far.)

Then again, it could be the start of a beautiful friendship…

My first grader asked: Is mutualism like chimpanzees grooming each other?

In that case, chimps grooming each other would be considered co-operation. While the grooming is good for both comfort and social bonding in both participants, mutualism is only used to describe behavior between different species.