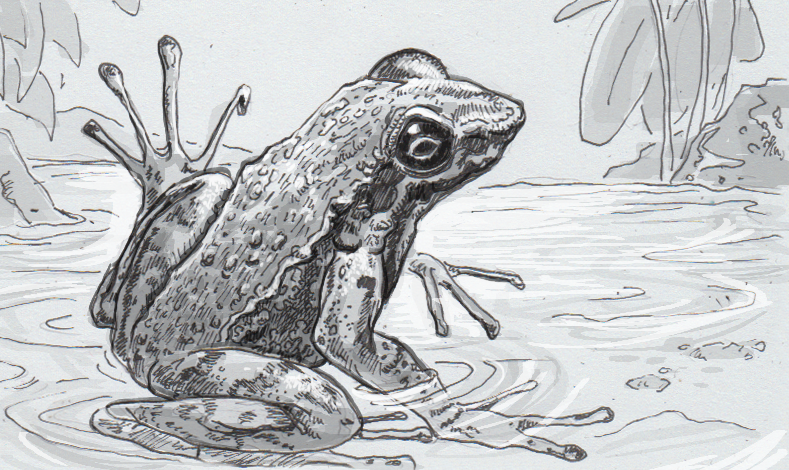 When croaking and chirping don’t cut it, these frogs communicate with choreography

While frogs can say more than just “ribit,” there are times when their words seem to fail them. This isn’t just because they’re being very particular about their language, but because the streams and rivers that many frogs live near are simply a bit loud. The fallback for many frogs are visual cues, but the Brazilian torrent frog, Hylodes japi, takes body language to new level, communicating to both it’s friends and rivals with a surprisingly nuanced vocabulary of gestures, poses and dances.

Small frogs in the “torrent” family live in wet, tropical habitats. Like many amphibians, they rely on their environment to keep their skin moistened, and even have specially adapted pads on their feet to better cling to rocks. This grip also allows for the variety of movements the frogs engage in to communicate, as you wouldn’t want to fall off your favorite rock trying to tell another frog that that rock was your territory.

Like an accomplished dancer, these frogs use their whole bodies when communicating with each other. Common movements include toe waggling, leg stretching, arm waving, “peculiar” walking and vocal sac inflation. H. japi took these movements further, adding push-ups, figure-eight head-bobbing, and toe displays. While this list may sound like ideas for a silly walk routine, many of these movements were tied to courtship displays (so, not terribly unlike humans.) Some activities, like arm-waving, seemed to used by one male to declare his rights to a particular territory. Females weren’t left out of all the wiggling though, and even used a sort of affectionate-looking touch they’d use on a male, usually eliciting some appreciative peeps in response.

These sophisticated gestures didn’t seem to come at the cost of H. japi’s vocalizations though. Researchers observed 18 distinct sounds, including a courtship call with five notes. While the sound of rushing water did seem to spur the development of visual communication, it seems that it was an additive development, creating some unexpectedly articulate frogs. Researchers suspect that this might not be as unusual as it seems, as frog communication hasn’t been thoroughly studied yet, meaning we have a lot more listening and looking to do.