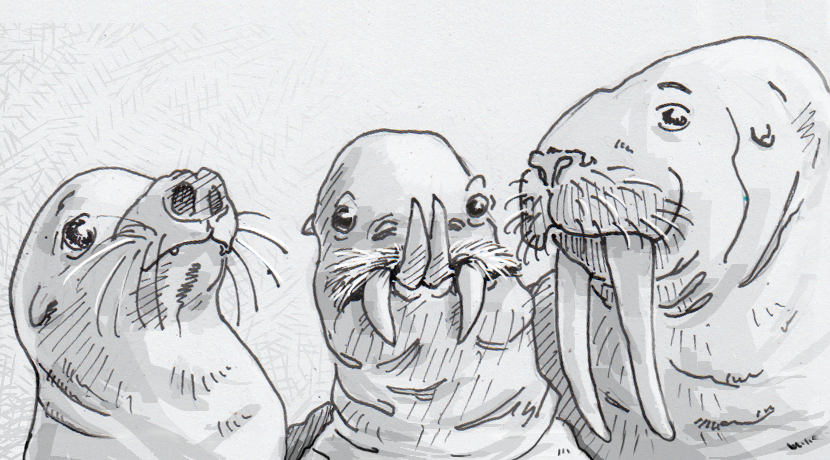 When walruses traded teeth for tusks

The world is currently home to one species of walrus, but this hasn’t always been the case. In the Miocene period, around 12.5 million years ago, there were closer to 20 different species living on shores from Japan to Portugal. You might not recognize the recently described Archaeodobenus akamatsui if you saw one though, as this Japanese walrus lacked the signature tusks we associate with these animals. Those tusks seem to actually be an exception to a family of animals that otherwise looked more like modern sea lions.

Archaeodobenus akamatsui was a large creature, probably weighing in at around 1,042 lbs., although that’s smaller than modern walruses can get. Like some of their contemporaries, they had pronounced canine teeth, but nothing that could be considered a tusk. They most likely ate a varied diet, particularly focused on things like fish they’d find in the ocean.

There was an impressive amount of biodiversity in this time period, possibly spurred by changes in sea levels. Changing shorelines likely split and isolated walrus populations to the point they could no longer inter-breed, even after being reintroduced to each other a later dates. The split lineages allowed for a wide range of body types, including the first tusked walrus, Gomphotaria pugnax from California.

G. pugnax still lacked the tusks of a modern walrus, but did pack four, over-sized pieces of dentry in its mouth. With two large teeth on top, and two on the bottom, it appears that this species started using these large teeth to target shellfish, moving away from its predecessors’ reliance on fish. While cracking shellfish may be what got the walrus tusk started, it’s certainly not where it ended up.

From feeding to multi-function

Modern walruses, Odobenus rosmarus, use their tusks for a variety of tasks, but they don’t involve prying open shells anymore. Modern walruses “suction feed,” meaning they basically vacuum the meat out of shellfish, with their tusks being incidental to the process. This method of feeding probably predated the enlargement of their tusks, as they’d impede many other forms of hunting at their current sizes. Both males and females have tusks large enough that the animals can use them to haul themselves out of the water onto icy shores. Since ancestors like Archaeodobenus akamatsui lived in warmer environments, it’s been theorized that the ice drove tusks to be what they are today.

Even if the combination of suction feeding and ice were contributing factors, they don’t tell the whole story. Tusks are much larger on males, growing up to of up to three feet in length. Males also use them to intimidate or wound male competitors, indicating that sexual selection has played a role in their exaggerated size. While we often like to look for singular, cause-and-effect relationships in anatomy across time, these large teeth may represent a case where a confluence of factors, and maybe some walrus ingenuity, helped build such striking features.