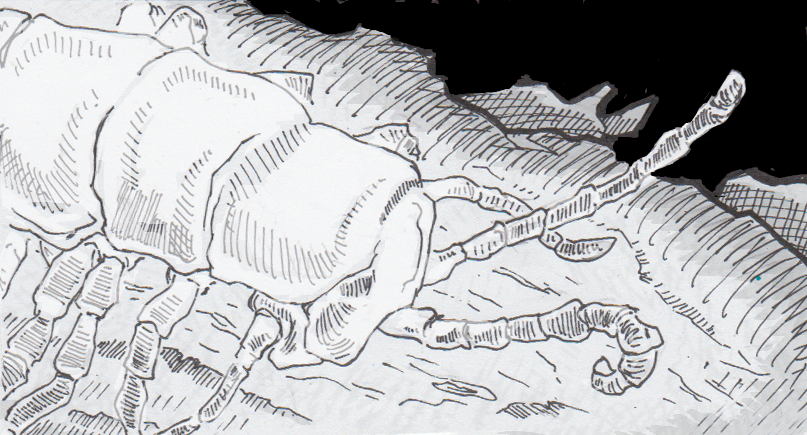 Which came first, the cyanide or the bioluminescent proteins?

It’s hard not to ascribe purpose to things, especially when there’s an easy narrative to be made. If a critter has a trait that helps it not get eaten, then that’s why it has that trait, right? But evolution doesn’t necessarily work this way— it can work with whatever’s available if it increases the odds of reproduction somehow. In the case of Motyxia sequoiae, what was available was being able to glow in the dark, which surprisingly turned out to not be directly tied to also being a walking cyanide capsule.

Millipedes in the Motyxia genus have been known to glow in the dark for some time. They’re also toxic to ingest, as their body carries dangerous amounts of cyanide. Many other toxic animals, like monarch butterflies, are brightly colored as a sort of warning to would-be predators, which is such an effective tactic to avoid being eaten that other species have evolved to mimic that appearance without being toxic themselves. So it wasn’t a big leap to assume that this “warning label” concept was the driving force behind Motyxia millipede’s bioluminescence.

Xystocheir bistipita, a related, non-glowing species of millipede, was also studied, in hopes that it could be a starting point to compare against rise of bioluminescence in M. sequoiae. But when X. bistipita was found to also glow, albeit faintly, much of this came into question. The two species’ genes were compared, and they were found to be related closely enough that X. bistipita was renamed Motyxia bistipita. The evolutionary timeline had to then be reconsidered to explain why M. bistipita would glow, even though it didn’t face the same pressures from predation as M. sequoiae, and thus didn’t need to warn other animals away in the same way.

Reconsidering the cause and effect behind the bioluminescence

The pressure that the duller M. bitipita, and earlier ancestors, did face in their environment was heat. The higher temperatures faced by these millipedes would be enough to disrupt the metabolization of oxygen. To fight this, they’ve evolved special proteins that help them safely survive the heat. It’s just a handy coincidence then, that these same proteins happend to make the millipedes glow. The new theory of the Motyxia genus then continues that when M. sequoiae moved to higher elevations where it faced more predators, there was some of the aforementioned “warning label” selection happening, which is why that species now glows brighter than their hotter relatives. It’s just that the glow was more of a happy accident, rather than the prime component of the arthropod’s evolution.