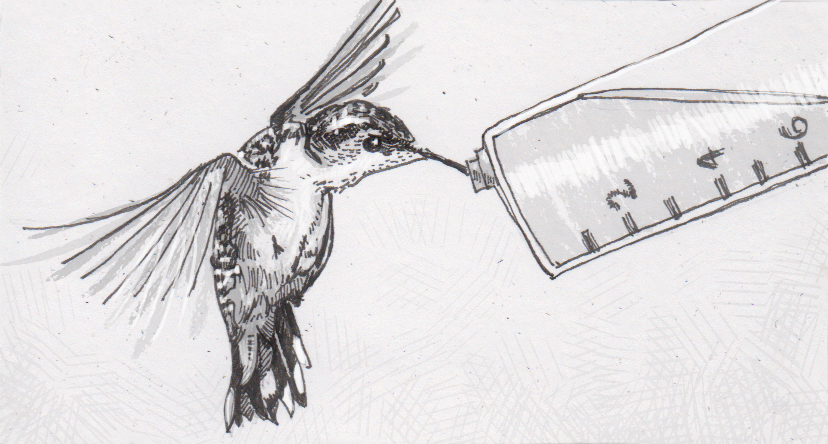 Hovering is an enormously demanding task for hummingbirds. The smallest bee hummingbirds (Mellisuga helenae) to the largest Giant hummingbirds (Patagona gigas) all have to flap their wings at least 50 times a second to stay aloft. Since they all feed on nectar from flowers and feeders, it makes sense that these creatures would invest in this ability, but that doesn’t explain their size differences. What advantage would a Giant hummingbird, which has ten times the mass of a bee hummingbird, gain by weighing so much more? An investigation into the birds’ metabolisms found that fighting gravity isn’t the only concern a hummingbird faces when flying out for feeding time.

It is true that larger animals face a bigger tug from gravity, and have more inertia to overcome when they want to move. Other studies have even found a sort of speed-limit for creatures of different sizes, as being big just requires more work. However, being tiny doesn’t always mean a creature is more efficient in its movements. The fact that smaller hummingbird species generally have to flap their wings more times per second suggests that they may have inefficiently small wings. Thus slightly larger species may be making up for their extra weight by simply being better at pushing air with their wider wingspans.

Measuring burn-rates in their breath

Instead of measuring the lift capabilities of each bird’s wings, researchers quantified hummingbird efficiency by seeing how hard their metabolism worked while hovering. Birds from 25 different species of hummingbird were trained to use special feeders equipped with something like a breathalyzer, but instead of measuring alcohol, it measured the bird’s oxygen and carbon dioxide levels. By comparing how much oxygen was inhaled, and how much carbon dioxide was exhaled, the rate of metabolic activity could be calculated and compared, allowing researchers to skip worrying about aerodynamics, weight, etc. The effect of all those factors would be boiled down to just how hard each bird had to work in order to stay in the air.

As predicted by the wing flaps, larger hummingbirds turned up with slower metabolic function than smaller hummingbirds. As they a body gets bigger, it seems that the gains from the wings outpace the penalty of extra mass, at least to a point (even Giant hummingbirds weigh less than an ounce.) Researchers suspect that this may explain why larger species generally live at higher elevations. Higher elevations have thinner air with less oxygen, and so the birds that live their need to be more efficient with their movements to get by. If smaller species tried to live in the same environment, they’d have to flap even faster to stay in the air, burning that limited oxygen even more. The difficulty of that scenario means that they stayed where the air is thicker, seceding that ecological niche to their larger kin.

Source: When it comes to fuel efficiency, size matters for hummingbirds by University of Toronto, Phys.org