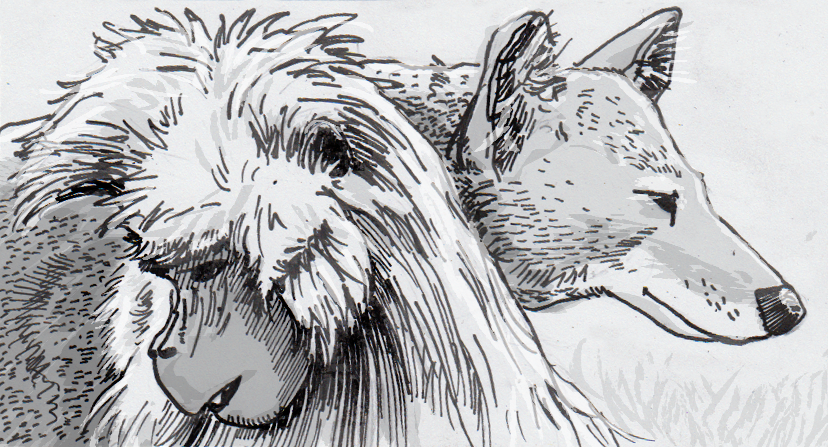 Wolves eat better when they keep monkeys off the menu

Ethiopian wolves generally eat animals smaller than themselves, like mice and rats, but not baby monkeys. This is noteworthy, not only because the small primates would be a fairly helpless snack, but because the wolves are around them, hunting for dinner, on a regular basis. Somehow, the temptation is minimal enough that the monkeys in question, geladas, don’t mind the wolves at all, practically ignoring their activities entirely.

The motivation for the wolves seems to be that they’ve learned that the geladas are actually good for business. The grazing monkeys may be disturbing subterranean rodents just enough to scare them out of hiding, at which point the wolves have an easier dinner ahead of them. The exact mechanism hasn’t been proven yet, but Ethiopian wolves hunting among grazing geladas had a successful hunt 68% of the time, up from 25% of hunting away from the monkeys. So the monkeys just make hunting easier, and it’s easier to leave their young alone.

The geladas may just be happy bystanders for the time being. There’s a chance that they benefit from having fewer rodents around, or that they’re super appreciative of the wolves not eating their young, but there’s no real evidence that there’s a clear trade being made in this relationship. This might change though if conservation standards change.

Ethiopian wolves are critically endangered, and protecting them properly would mean protecting their habitats as well as limiting their exposure to domesticated dogs, which can pass on fatal diseases. That combination would be great for the monkeys too, since they enjoy the same habitats and are frequently victims of attacks from people’s dogs. If people can pivot quickly enough to save the remaining wolves, the monkeys may find themselves in a pleasantly protected neighborhood.