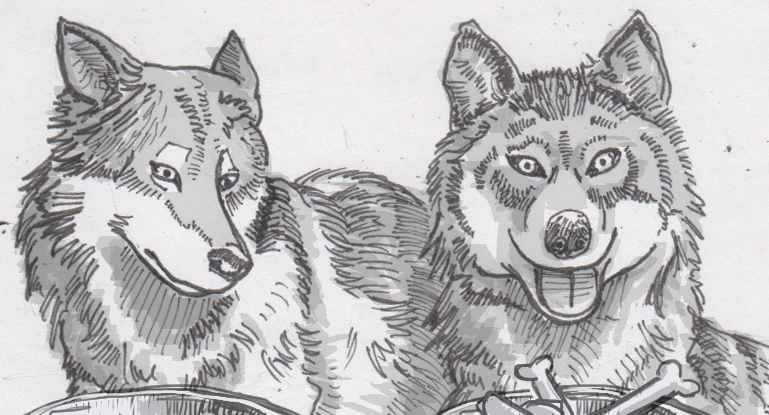 Your dogs notice when you play favorites. Like humans and other primates, dogs have been found to keep a close eye on how much they’re rewarded compared to their peers. If they feel that things aren’t fair, they’ll even go on strike, ceasing to perform whatever task is being asked of them until accounts are settled. This very relatable behavior has long been thought to have been a product of domestication— as humans trained dogs with rewards, perhaps we also sensitized them to the portions given to their peers at the same time? However, testing these concepts with wolves has found that these concerns reach further back in the canid family tree.

To test the boundaries of dogs’ and wolves’ sense of fairness, the animals were trained to press a button in exchange for a small reward. They were also paired with a friendly compatriot that had the same job, usually for the same rewards. However, when one wolf was repeatedly given more than the other, it didn’t take long for the neglected animal to take notice. If one participant was given less, or nothing at all, they’d eventually reach a sort of breaking point and cease cooperating with the button-pressing, even when verbally prompted to do so by trainers.

The exact limit for each animal seemed to vary on a few conditions. When working alone, wolves were fairly tolerant of missed treats, and were much quicker to act upset when they witnessed their partner reaping more rewards for the same task. Wolves with higher station in a pack were also found to be more likely to quit over unequal rewards, while lower-ranked wolves were possibly more used to getting less resources than other members of the pack, and thus took longer to protest.

In general, wolves were actually more sensitive to unequal rewards than dogs, immediately upending any role that domestication might have played in these behaviors. After quitting the task, disgruntled wolves would also put more distance between themselves and their human trainers than fed-up dogs would, indicating that humans may actually be mitigating some long-ingrained responses. This sense of fairness may then stem from wolves’ social nature, raising questions about how other animals that share resources handle everyone’s expectations.

My four year old asked: Do cats get upset like this?

House cats probably don’t worry about fairness in this sense, since they don’t normally live according to social structures the way dogs or wolves do. Lions do have a social hierarchy, and while they do have a similar sense of feeding priorities as wolves, nobody seems to have asked them to press buttons to find out how quickly they feel ripped off.

Source: Sensitivity to inequity is in wolves’ and dogs’ blood by Georg Mair, Scienmag