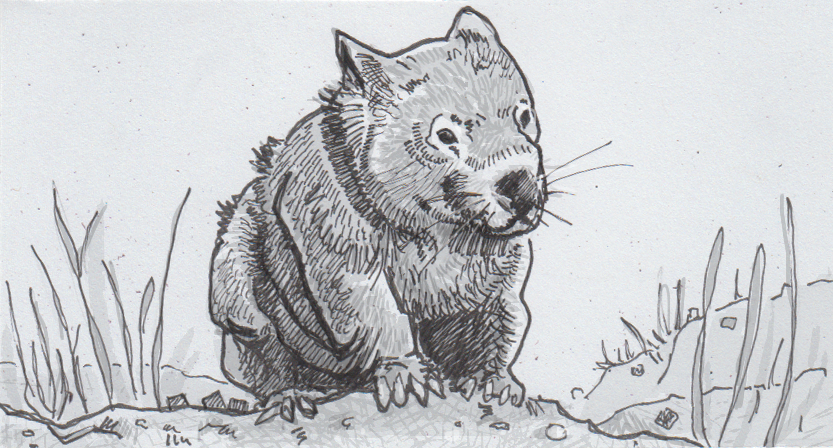 Leave it to a second grader to compare animal droppings to desserts, but upon seeing the oddity that is wombat poop, my daughter immediately brought up how much they look like well-roasted, jet-puffed marshmallows. And really, she’s not wrong— wombat poop is very unusually cubic in nature, with six mostly-flat sides and rounded edges that don’t resemble most creatures’ waste. There does seem to be some benefit to the wombats in making squared-poo, but those benefits don’t really explain why it’s formed that way in the first place.

As far as anyone can tell, the key to making square poop is to take your time. Wombat (Vombatus ursinus) digestion works very slowly, sucking every last bit of moisture and nutrition possible out of food before it’s pooped out of an unusually-long digestive tract. While your average meal moves completely through your body in around 53 hours, wombats work on their food for closer to 14 to 18 days. The resulting poop isn’t just cubed, it’s also remarkably hard and dry, which is probably a big part of its final form.

Before the poop reaches its final destination, it moves through parts of the wombat’s intestines that are notably ridged in shape. Acting a bit like a mold, those ridges seem to create regularly-spaced dents in what would otherwise be more traditionally tube-shaped poo. As the poop continues through the intestine, it hardens further, and those dents become weak points where the poop tube breaks into smaller, even little cubes. The wombat’s anus then has to pass these harder, square waste pellets despite its more rounded shape, although it does so quite well. A typical night out for a wombat can involve dropping 80 to 100 poop squares around the neighborhood.

All that pooping does more than just void digestive waste. As nocturnal animals, wombats don’t have great eyesight, but they do have good sense of smell. Their poop is then used as territorial markers, often being deposited near burrow entrances, on rocks or even on dead logs, if the wombat feels like taking advantage of the stability offered by their flat-sided feces. The smell of the cubed crap can then serve to warn off other wombats, or invite them closer if it’s mating season. Truly, this doody handles its double duty quite

Source: Why do wombats do cube-shaped poo? by Louise Gentle, The Conversation