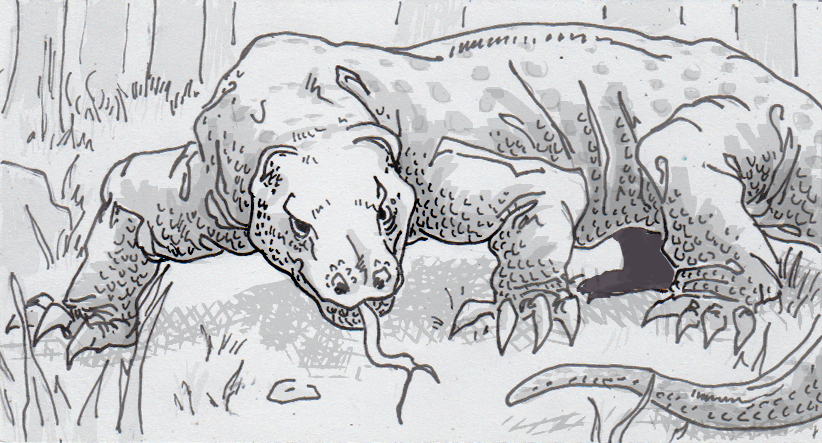 In the 40 million years since Australia separated from Gondwana, the continent seems to have become a breeding ground specialized in unusual, dangerous, and occasionally cute animals. Lizard fossils found in 1859 revealed a perfect example of these lines of evolution, checking off almost all the boxes: it was huge, carried steak-knife class teeth, and like many other Australian animals, was likely venomous. And since it was alive as recently as 40,000 years ago, it probably didn’t bother the newly arrived Australian citizens all that much.

Varanus priscus was a monitor lizard, and seems to have been a close relative of the neighboring Komodo Dragons from Indonesia. While V. priscus‘ size can’t be fully determined from the available fossils, even conservative estimates make it the largest lizard ever to walk the Earth, ranging somewhere between 14 feet to 23 feet long. Its mouth was packed with long, curved teeth, although its bite wasn’t comparable to other apex predators like a tyrannosaurus. Rather than rely on a muscled jaw to bring down prey, V. priscus could likely rely on venom to do the job, much like other lizards in the monitor genus.

Assuming comparisons to living Komodo dragons are on the mark, this lizard would have had venom glands in its gums. The venom would then seep out around the animal’s teeth, allowing them to “inject” it into prey when biting. While large lizards are capable of quick movements when ready to strike, they’re not so good at chasing down a meal. The venom likely did that job for them, lowering the victim’s blood pressure and increasing blood loss so that the exhausted prey could be more easily captured.

Mammals on the menu

The target of such a large predator was likely large themselves, such as a Diprotodon. Diprotodons resembled a large up wombat or koala, but with the heft and scale of a bear. While these herbivores had teeth even a gerbil would snicker at, they probably weren’t using them as weapons to fend of venomous lizards. Trace fossils show footprints of many of the ancient mammals walking together as a herd, potentially formidable enough to give pause even to the world’s largest venomous lizard.

The two things that probably posed the biggest threat to V. priscus were climate change and humans. As Australia’s climate  lead to drier, less forested terrain, the lizard’s population would have declined alongside it’s loss of habitat. Assuming the early Australians were anything like humans elsewhere, they may have contributed to the animal’s eventual extinction.

While we don’t know exactly how gentle humans’ first interaction with this lizards was thousands of years ago, there’s certainly a chance people would have been eaten. Komodo dragons have eaten humans, although that’s between scavenged human corpses, birds, bird eggs, monkeys, boar, horses, and water buffalo.

Source: The dragon down under by Jan Freedman, Twilight Beasts