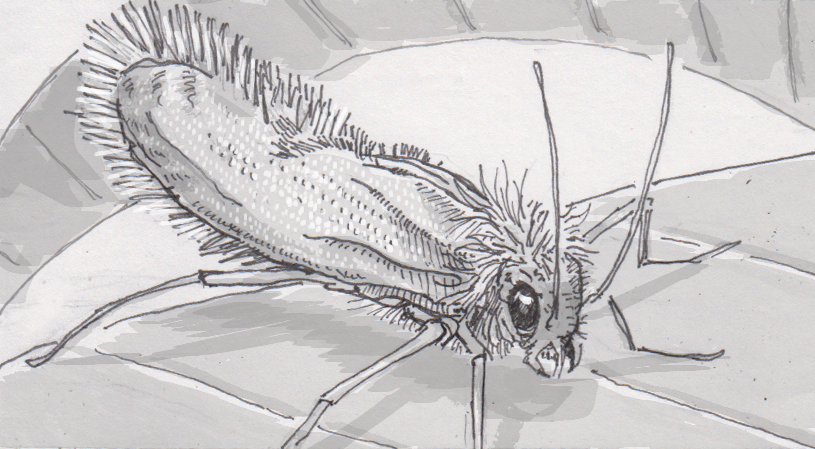 It’s an odd question to have to ask, but what good is a drinking straw without a drink? A skinny tube, such as the long, nectar-sucking proboscis found on moths, flies and butterflies, is generally only used to obtain liquefied nourishment. In some cases, proboscises can be so specialized that they only work with specific flowers, which makes the discovery of some 200-million-year-old butterfly fossils quite mysterious. What would that ancient insect be eating if it evolved before the world’s first nectar-filled flower even existed?

The fossils in question were found in Germany, dug out of what was once an algae-covered bog. The low oxygen levels of that bog water helped preserve some amazingly delicate scaled wings off of what is now the oldest-known member of Lepidoptera, the group of insects that includes moths and butterflies. Aside from being tiny, the scales were hollow, requiring that they be removed from the surrounding soil with a “pick” tipped with a single human nose-hair to avoid damaging them.

From old wings to early diets

The structure of these scales was crucial to this study though, as it greatly narrowed what lineage this insect came from. Today, hollow scales are found in moths and butterflies in the suborder Glossata, a group also noted for their flexible probosices. When this anatomy is compared to the timeline of flowering plants, it becomes clear that this Triassic-aged butterfly had no nectar to drink anywhere, since the fossil record can only confirm the first flower’s existence 70 million years later.

So what does this say about the proboscis this insect probably had? There isn’t much evidence to work with, but the current hypotheses are that this early butterfly or moth was using its elongated mouth to hydrate itself in the Triassic’s arid climate, or pick sweet pollen out of sap. There’s precedent for the latter option, as kalligrammatid lacewings, an extinct line of insects that were the spitting image of a modern butterfly, were also thought to pick up pollen with their elongated mouthparts around 125 million years ago. Since there even flies toting proboscises of their own today, it seems that there has been an evolutionary advantage to elongated, flexible mouths for quite a long time.

My third-grader asked: How did they know it had a proboscis if they didn’t see its head?

It’s a guess, but a guess based on a number of types of evidence. Members of Glossata all have proboscises , and while the owner of these wing scales may have possibly bucked that trend, that anatomy is a defining feature of the group. It’s also not the only specimen that’s rewriting Lepidoptera’s origins. Another fossil from 190 million years ago was found in England, helping to establish that these insects were fairly well established by the Triassic period. This doesn’t mean that a better preserved fossil can’t overturn this hypothesis, but right now everything is pointing in that direction. At least until we find fossils from the true first flower, which may be even older than any of these bugs.