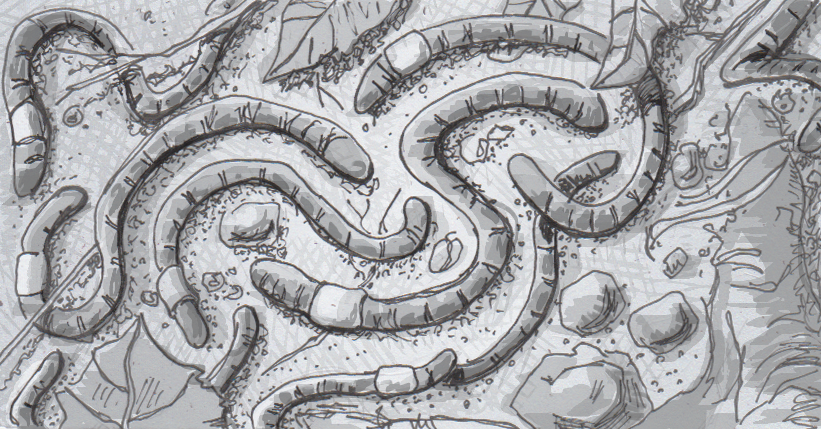 In a world dominated by cute kitties and beautiful birds, creepy crawlies like worms don’t seem to get a fair shake. The glistening, wriggling arthropods don’t have big, bright eyes or nice colors, but that shouldn’t stop us from respecting their place in the world, right? On a more selfish level, earthworms can boost composting efforts, aerate soil and eat dead leaves and plants, making a big impact on their ecosystems. The problem is that they’ve actually been reaching outside their native ecosystems a bit too much, and while they may help boost our gardening, some species may actually be putting entire forests at risk of destruction.

Worms both acrobatic and invasive

One of the more extreme examples of this conflict are various species of Jumping, Crazy, Wriggling or Snake worms in the genus Amynthas. These worms are noted for the contrasting color of their clitellum, but even more so for their high-energy movement when the worm is disturbed. As their names suggest, the worms will wriggle, roll and flip around as much as possible without limbs, even going as far as detaching their tail as a distraction to would-be predators (which also keeps flipping around after it’s been dropped.) These dramatic presentations make an impression, but they’re not the reason ecologists are concerned about worms like Amynthas agrestis in North America. The real issue is what they eat and where they poop.

Earthworms famously eat dead plants lying on the ground, then dig into soil, breaking it up as they go. In your compost bin, this is fine, but in a mature forest it can be a big problem. During the last ice age, glaciers covered much of North America, killing off most native worms and forcing forests to adapt to living with different kinds of nutrient cycling. Earthworms brought from Europe, like common night crawlers or red wigglers, were able to dominate North America, becoming more common than the native species you probably never see. South of where the glaciers once stood, this is less of a concern, but as the worms push north, it’s proving to be quite disruptive.

Members of the Amynthas genus make things worse by eating leaf litter in forests, but then barely digging into the soil to deposit nutrients from their waste. This means that young trees can’t get necessary nutrients from underground as easily as they used to. It also disrupts the habitat of various animals and low-growing plants, transforming what were once dense forests into stands of trees surrounded by naked soil. Worse yet, this shallow nutrient cycle may actually lead to more carbon being released into the atmosphere, rather than being trapped in the soil, which warms the planet… extending the viable range for the Amynthas worms.

Slowing the spread of Amynthas

Unfortunately, once invasive species gain a foothold, it’s very hard to retroactively remove them from an environment. At this point the European wigglers are pretty firmly entrenched, but ecologists are hoping to control the spread of the jumping Amynthas worms from Asia. Aside from more controls on what worms are used as fishing bait in forests, people need to exercise care with their garden composting. Amynthas worms survive the winter in cocoons in the soil, and can accidentally get gathered and possibly relocated when people rake up materials like leaves for a compost pile. Since even a lone female worm is capable of laying eggs, catching every worm counts. Gardeners are encouraged to report sighting of Amynthas worms to state resources departments, and only buy compost that has been treated to kill any hidden cocoons.

My second grader asked: Do we have native earthworms here?

They exist, but you’ll only find them below the glacial boundary. Native and invasive members of the Lumbricidae family can be found in the United States, but the natives are often smaller and slower to work through plant materials, making them less popular for composting. One of the most widely known species,
Lumbricus terrestris, or nightcrawlers, are popular in gardens and as fishing bait, but are another European import, possibly delivered with the establishment of British colonies in North America hundreds of years ago.