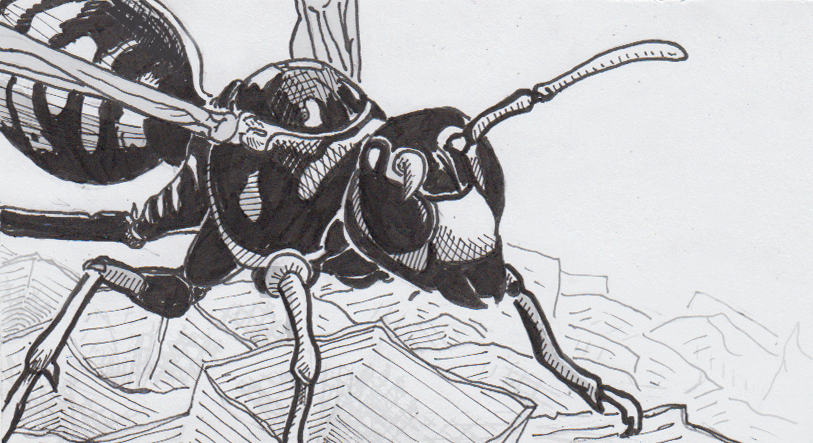 Yellowjacket wasps are bad at B.Y.O.B.B.Q.

Evenings when we’ve grilled have often been interrupted by the dreaded “meat bees.” The yellow and black insects buzz around, dive-bombing any slices of cooked meat left unguarded on our porch, or at least not in someone’s hand or mouth. It always seemed so odd that bees would do this, since the meat couldn’t possibly be confused as a source of nectar. That is until we found out they were Yellowjacket wasps, and they knew exactly what they were after.

The wasps in question were either Western yellowjackets or German yellowjackets. In either case, they were attacking our barbeque in order to get protein to feed their larvae. In the start of the summer, nests are usually expanding, and the wasps act as predators against other insects in order to feed their young. As the summer progresses, growth in the nest slows, but sugar is needed to maintain the more mature colony. This is when the wasps are much more likely to behave like scavengers to get sugar from fruit or unattended cans of syrupy soda (so watch out if there’s a chance a yellowjacket has crawled into your can!)

Yellowjacket wasps generally build their papery nests inside old burrows in the ground, or in other enclosed spaces like the ceiling of a house. In burrows, they can expand the available space by moistening and digging at the dirt walls, making more room for additional paper cells in which to lay eggs. By the end of a summer, some nests can have a population of up to 15,000 wasps, although some top out at only 1,500. The winter then ends the growth cycle, freezing the colony and forcing a queen to start again the following spring. Of course, mild winters in California mean that some nests here carry on for years at a time without interruption.

An agitated Yellowjacket can be a hazard, as they can bite and sting multiple times. As a more aggressive species, they’ve been known to be provoked while scavenging (see the soda can note above!) and of course if they feel you’ve threatened their nest. In either case, it’s probably best to avoid them if at all possible.

Our neighborhood’s other common wasp is the Paper Wasp. Paper Wasps are more likely to build their nests in elevated locations than a yellowjacket, such as hanging from the branch of a tree or under the eave of a house (or inside my kids’ playhouse). The underside of their nest is open, like an umbrella, allowing you to see the individual cells for housing larvae. They’re less aggressive than Yellowjackets, unless, of course, you threaten their nest.

My kindergartner asked: How do yellowjackets bite? Why aren’t they like bees that can sting only once? Wasps have considerably sided mandibles, which they can use for hunting, digging out burrows, scraping bark in order to make pulp, or chomping your arm, if provoked. The stingers on a wasp are smooth, and the wasp can stab with them repeatedly to deliver more venom. This is in contrast to bees, which have barbed stingers that hook into the target, ripping the venom sac from the bee’s body and killing it in the process.