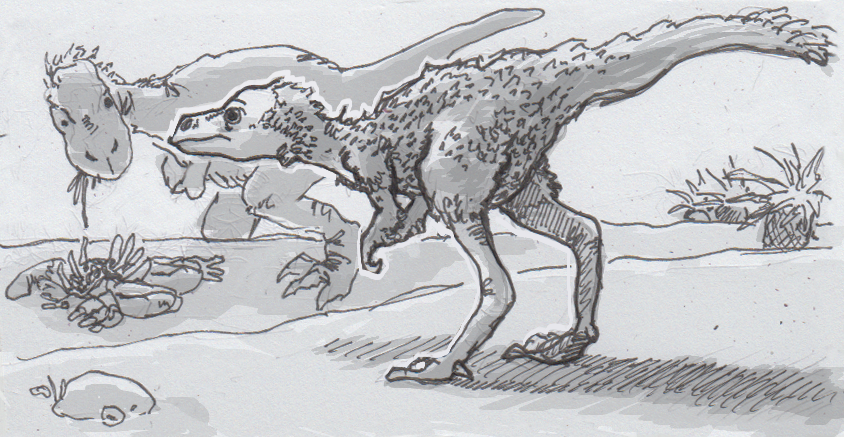 Growing up in the shadow of greatness can be hard. For a young Tyrannosaurus rex, that shadow could be over 40 feet long, and include impressive details like huge jaws and giant teeth. These famous theropod dinosaurs were specialized for predation, with strong legs and incredible jaws that could overpower even larger prey, like a 31-foot-long hadrosaur. At half the size of their parents, younger T. rexes couldn’t pack quite the same punch, and based on their anatomy, it looks like they didn’t even try. While they waited to grow up, these young heirs to the theropod throne probably hunted in very different manner from their adult counterparts.

Compared to adult T. rexes, younger tyrannosaurs had bodies built for speed and slashing, rather than direct assaults from an ambush position. Younger animals have notably longer, skinnier legs that would have allowed for swift running over longer distances than the thicker legs of their parents. This would have allowed the adolescent tyrannosaurs to run down prey before attacking with lighter slashes and bites, versus the tiger-like ambush hunting adults likely engaged in. Similarly, the thick jaws and teeth that make T. rex famous were apparently an adult feature, as younger specimens have more blade-like teeth. The combination indicates that younger tyrannosaurs were still impressive predators, but they probably targeted a different class of prey than adults of the same species.

This kind of variation in anatomy throughout an animal’s life cycle is called ontogeny. The differences in T. rex jaws and legs are a fairly strong examples of ontogeny, but these theropods were certainly not the only animal to experience such changes as they matured. The proportions of young animals, from birds to humans, are often strikingly different from their adult counterparts, and these differences regularly reflect differences in ability and lifestyle. With this study of young tyrannosaurs, scientists wanted to hone in on just what those differences would have been, since these animals had features that should have allowed them to be self-sufficient, even if they couldn’t hunt the same things adults did.

Aside from the practicality of using lighter-weight teeth on smaller prey, these developmental phases may have helped young tyrannosaurs avoid being eaten. Tyrannosaurus rex in particular had next to no predators to compete with in its late-Cretaceous ecosystem, and so adults could have probably feasted on whatever they pleased. Younger T. rexes would have been better off avoiding direct competition with their formidable relations,  and so by chasing after smaller, faster food, they avoided having to fight for their own meals as much. Some of these hypothesis are hard to prove at this point though, because the sample size of young theropods is understandably small, and when a young animal can look significantly different from adults of the same species, it becomes difficult to pin down which fossils are truly distinct, and which are just ugly ducklings on their way to becoming 40-foot-long, predatory swans.