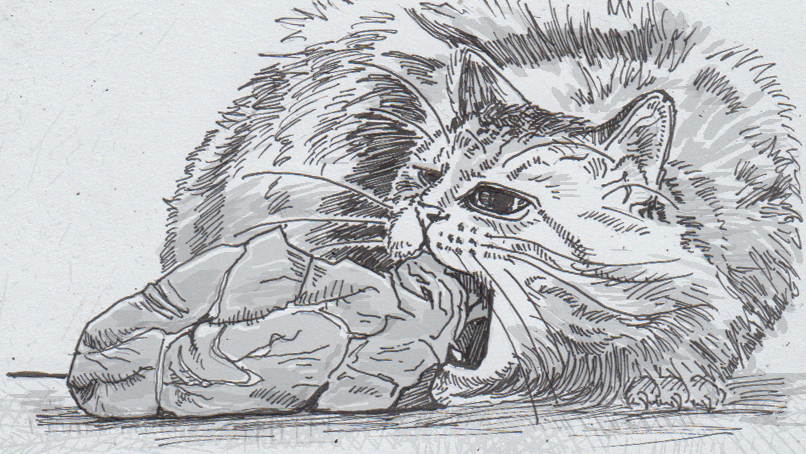 Your carnivorous kitty is more interested in kale than candy

As omnivores, humans have a variety of flavor interests. We’ll snack on salty, savory, and sugary foods, sometimes with too much gusto. We even go as far as cultivate bitter foods, savoring the flavors that originally evolved to scare or kill herbivores away from certain plants, like mustard. As much as we’ve developed this interest in strong, bitter flavors, it turns out that cats can probably appreciate an IPA way more we can, as they have a swath of bitter taste receptors in their mouths. It’s save to say they’re not checking out the beer isle though, which raises the question of just what those bitter receptors are actually for in animals that shouldn’t be eating broccoli, kale or hops.

Cats, like many carnivores, have a narrower range of taste receptors than humans. They’ve dropped the ability to taste sugars because sweet fruits and nectars weren’t on their menu. Instead, their palette is good at detecting salty and savory flavors, which is a good match for the meat-based diet they live on. Of course, a cat does eat more than muscle tissue, and so cats have also learned to prefer mulit-textured foods to help them get the most out of the crunchy bits they encounter when gobbling rodents or birds. All in all, they’re basically the opposite of small children.

None of this explains why cats not only have bitter taste receptors, but seven to 12 kinds of bitter receptors. When compared to some other predators like polar bears, this isn’t a huge outlier, but it’s still an odd evolutionary investment when the meat they eat shouldn’t be bitter in the first place. It may indicate that these bitter receptors didn’t originally evolve to help with the food in the animals’ mouths, but in their body and world around them. Since we have bitter taste receptors throughout our digestive tract to help monitor the levels of ingested toxins, we need to think of them less as ways to detect flavor and more as a sort of chemical safety mechanism. In that context, a carnivore that’s sensitive to the taste of toxins might simply be trying to avoid toxins from some toxin-laden frogs or reptiles. Our enjoyment of yummy, bitter plants like coffee may just be our happy accident along the road of evolution’s food safety measures.

Source: What Food Tastes Like to a Cat by Jennifer Viegas, Discovery News